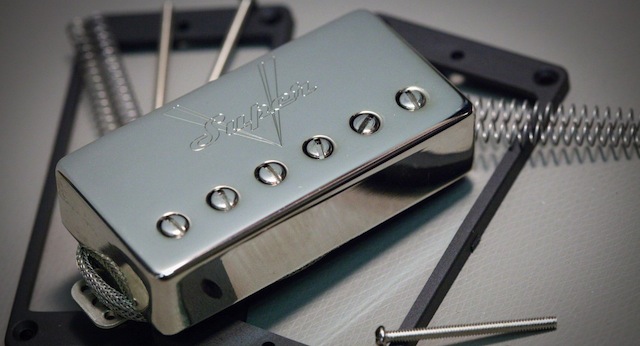 The Super V is a humbucker designed for George Lynch.  And yes, it’s not on the Custom Shop page.  It was pulled down in very late 2013 or very early 2014 when Lynch fell off the Duncan artist roster (see my review of the Mr Scary model made by Arcane).  But… it has always been available.

“What?!”, you ask.  “Another ‘secret menu’ item?!”  Well, yeah.  Just like the Dokkenbucker and the “original” El Diablo (an overound, hot Screamin’ Demon – yes, I also have that one!  LOL!).  And just like many, many more options – the S-Deco humbucker being one of my favorite current ‘secret menu’ items.    The Angus Young humbucker set finally graduated up from the ‘secret menu’ just last year.  ‘Secret’ might just be hyperbole, as one should expect that every company wants to sell products.

In late 2005, Lynch was touring with a Super V prototype.  It was in a ESP Kamikaze, if I remember correctly.  At that time, Lynch’s tech told me it was a medium output affair, harking to the days of a more classic vibe.  The mentality is that all the higher output pickups compromise the tone of the wood and the character of the amplifier.

Throw in a few post-prototype tweaks and it is no longer a medium-output pickup.  Even still, with a DCR in the 17k range, the Super V is not a high-compression flat-voicing pickup.  It has clarity and chime and a very open quality.  Yeah, I know, that’s quite the curiosity when put on paper.

You can find the Super V as an original offering on a few Lynch models in the 2007 ESP catalog (page 8).  The same catalog shows Pearly Gates in the GL-56 and 20th anniversary Kamikaze GL-20, which is an interesting notion.

How about we ponder the origins of the Super V.  It is essentially a resurrected version of one of the original JB prototypes.  Hold on, nobody is saying it’s a JB.  HaHa!  It is not uncommon for an artist to have a few options put in front of them.  The one that Jeff Beck picked is the JB.  The Super V is based on one of those other ones that Beck was trying out.  Someone within Duncan tells me putting an A5 in the Super V would pretty much give you that protoype pickup from the 70s that the Super V is based on.  It is also suggested that there’s a different flavor of the wire selection.

That can make you wonder how the Super V fares with other versions of the JB, like the Concept JB or a very early ‘The JB Model’.  Specs are below.  And while they appear to be in the same ballpark, they are more different than the numbers appear.

When first looking at the Super V, it was presented with that engraved cover.  Yeah, that cover came off.  LOL!  You can get yours without a cover, if you like.  Underneath, mine has double block bobbins, short legs, and 4-con lead wire.  It is in a H-S-S super strat hot-rod with poplar body, maple neck, rosewood board and a German Floyd Rose.  And… it still lives in that guitar.

Considering the output issue, the Super V in that guitar is up next to some pretty high-output single-spaced humbuckers.  Output is not an issue.  At.  All.  The more classically-based voicing and the Alnico 2 magnet are also no reason for concern.  The Super V has presence and clarity and sweetness and bite and bloom and control.

Let me put it this way.  At the time, I’d started to talk to MJ about what I was hearing in my head for a great bridge humbucker for my preferred musical playing preferences.  She sold me a Super V and the conversation ended.  LOL!  Interesting tidbit, she sold me an Allan Holdsworth model at the same time… which has also never left that guitar it was put in to.  The Lesson: get to know your pickup winders and let them get to know you.

So, what’s up with the Super V?  How does it sound?

Glad you asked.  LOL!  Like this has all been leading up to, it is a very open and transparent sounding humbucker.  P.A.F. can mean lots of different things to lots of different people, but imagine a chimey and woody P.A.F. turned up a few notches.  Which is to say, louder, but without so much of the congestion and pronounced tonal shifts that come with something that is so overwound.  So… there are no boomy thick wooly lows.  And even with that, you get a nice bit of mid-range grunt and a slight rude ‘tude.

Now there is a bit of grind going on.  Depending on your style, you might catch something between the roar of a stereotypical hot humbucker and the snarl of a more vintage character.  While there are some Alnico 2 humbuckers out there that are associated with a “soft” tone, that’s just not the case with the Super V.  I can totally imagine the Super V bringing new character to a thicker-sounding guitar, much in the same way I experienced with the Seth Lover set.

The vibe of the Super V is so groovy, that I commissioned MJ to make one in a ‘single coil sized humbucker’.  Imagine a Little V.  Or a Super Jr.  LOL!  I like to put “bridge” pickups in the middle position, so that is what happened.  Rather than fill up a H-S-S with two Super Vs, I put the Little V in a different H-S-S.  Maple neck-thru with alder wings, ebony board and a to-be-named-at-a-later-date JB variant in the bridge with a hot blade single-sized humbucker in the neck.  Once again, the V holds up well when running with the high-output pack.

All that talk about where it came from and what it is… how about some specs:

There you have it.  Lynch has 3 (three!) signature pickups with Duncan.  The Dokkenbucker (for all your 80s needs), the Screamin’ Demon (to give you that 90s Lynch fix), and the Super V.

Lynch was hanging with MJ and Seymour at a recent event and visited the Duncan company the following week.  Maybe he is giving the Duncan company another shot.  Good for him.  If he decides to get back on their roster, perhaps we can expect more Lynch signature models from MJ. 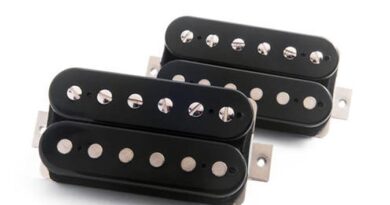 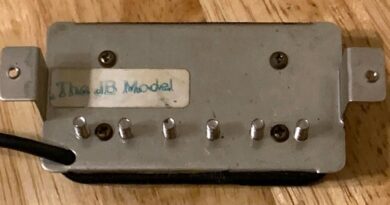 Revisiting A Classic: The JB Model 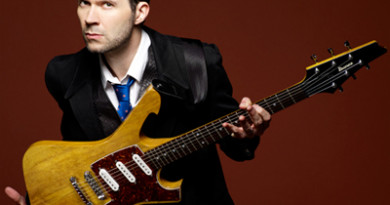