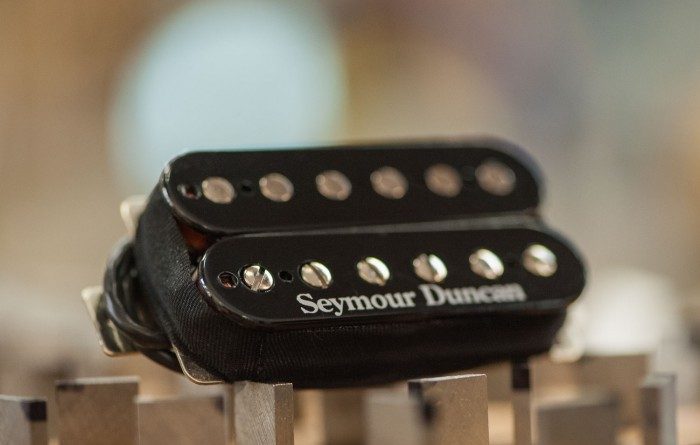 Introduced in 1979, the Duncan Custom is a ceramic-based humbucker intended as a more powerful PAF.  Coming out the same year as the Pearly Gates, the Custom has become a cornerstone of the Duncan company’s menu.

It’s not really old news to some people that Eddie Van Halen appears to have been one of the earliest big-name fans of the Duncan Custom.  In an October 1979 issue of Guitar Player magazine, the Custom is advertised as “(Van Halen)”.  The same ad was seen in the December 1979 issue, sans the “(Van Halen)”.  LOL!  That Eddie!  For a guy that didn’t want people to copy his tone, he sure sells a lot of gear with his name all over it.  HaHa!

But to be clear, Eddie was digging the Custom as an existing product and it is not a design that was made for him.  The origin of the Custom model has more to do with how someone that was ordering some parts slipped up.  Seymour made the best of the situation and came up with a new design to make use of an oddball purchasing snafu.

The Duncan Custom is Seymour’s first official offering with a ceramic magnet.  These days, it’s more interesting that it’s a regular thickness magnet.  Some call it a thin ceramic, but it’s the same thickness as most any alnico you’ll find in your average humbucker.  The thickness is a point, as a lot of the ceramic humbucker on the market these days are thicker.  So many that people have to pretty much make it a point to specify “regular” as “thin”.  Thicker ceramic magnet are in the more powerful options, such as the Duncan Distortion (a variant of the JB).  Multiple ceramic magnets are in other models like the Invader (another JB variant) and the Black Winter.

The interesting aspect of the magnet selection is that your Average Joe does not generally associate a ceramic magnet when thinking of a humbucker built on a PAF voicing.  At an advertised 14.1k DCR, the Duncan Custom is not just an overwould 42 AWG pickup.  So don’t be letting that whole PAF approach dig in too deep.  It’s a little more about the EQ of the pickup having a bit of the relaxed midrange.  I suspect this has something to do with why the Custom is popular with many singlecut style players.

As is the case with me, I have older examples of humbuckers that originate from the Duncan company’s early days.  One has a label stamped with “Duncan Custom” in blue, most likely from the late 70s or early 80s.  Another one has “DCJ”  on the label and a baseplate that would put it between 1983 and 1988.  The only example of a newer one that I have is a Custom that was immediately cannibalized to make a 59/Custom Hybrid and to make a JB/Custom hybrid… so I have no frame of reference on it as a proper Custom.

What you get with the Duncan Custom is an option that’s powerful without being over the top.  It has some girth, but it reamins firm.  There is some grind, but it’s not too compressed.  If you find the JB too middy and the Distortion too edgy, check out the Custom.  It is going to be great for backing and good for leads.  The Custom handles clean tones better than you expect for a pickup with this much power.  That really seems to have to do with the voicing.

The voicing is also why I suspect there are so many other variants of the Duncan Custom.  While not as many offshoots as the JB, the Custom clocks in with three commonly known production model permutations.  There is 1987’s SH-10 Full Shred, which uses an Alnico 5 and exchanges all the poles for Allen head screws.  The SH-11 Custom Custom, that only swaps out for an Alnico 2.  And finally 2002’s SH-14 Custom 5 having, you guessed it, an Alnico 5… this time with the classic pole piece configuration.  If you want to do a deep dive, you can also consider 2012’s SH-16 59/Custom Hybrid, but that’s only one coil of the Custom.

Take a listen to the Duncan Custom at the 7:45 mark of this shootout.  If you’d like a frame of reference, the Custom 5 comes immediately after the Custom.  You can also go to the YT page, click on ‘Show More’ and go to any of of the 15 models that you might know for a comparison to the Custom.

Did you catch that was Keith Merrow playing in the shootout.  Don’t forget to visit my article on Keith’s signature Fishman Fluence set.

The Duncan Custom is good for heavy blues, all levels of rock, and has taken a foothold in the metal scene.  It comes with 4-con lead wire for all your favorite tricked-out wiring setups, and is available in all the typical color options.  There is also a 7-string production model and I’m certain that Custom Shop Manager MJ can tweak it out with whatever you might can think of. 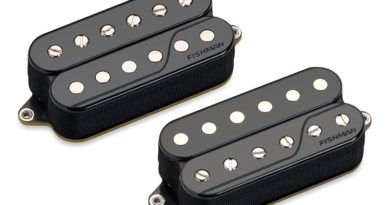 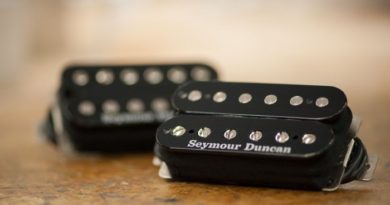 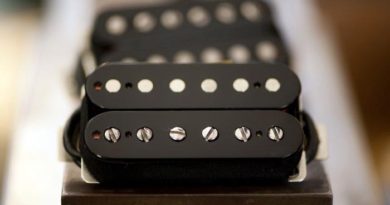