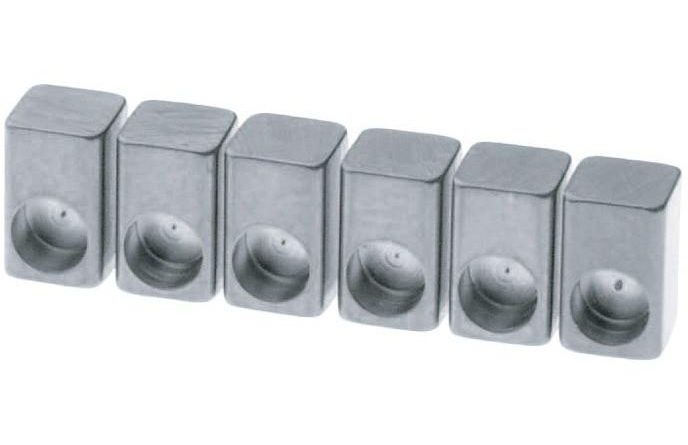 Titanium String Lock Insert Blocks? “What are those?!?” you ask. Those are the little blocks in the saddles of your Floyd Rose that clamps the string ends in place. If that doesn’t ring any bells… they are what those long screws on the end of your Floyd goes inside to secure the strings. Here’s a refresher:

Those are your standard ones that come in your average Floyd Rose style locking tremolo. If you have most any common form of a locking or double-locking tremolo, you know these. You might also know the 9th level of hell that when is your insert blocks succumbs to the force of clamping the strings into the saddles.

With any serious usage, the standard insert can most likely at some point mushroom or deform or expand or crack in some manner. It can compromise the stability of the part. It can also make it extremely difficult to move the block back and forth in the saddle to insert a new string end. And it can also make it even harder to get the block out of the saddle. Is that a design flaw? I’m not saying that. But I’m obviously not the only person that’s happened to. That’s why I’ve been using Titanium String Lock Insert Blocks for about 7 years now.

Here is the meat of the matter: keep an eye on what you’re getting. It seems that in the titanium market (and brass too, for that matter), there’s a lot of tech-talk going around that’s not always supported with facts. I’ve spent years digging into the information surrounding some of the “upgrade” parts for these tremolos. For example, I found a titanium expert. When I say “expert”, I’m talking about someone that tends to have machined titanium and other solvay composite materials for the aerospace industry and for Formula 1 Ferraris.

There are currently only a few places to get Titanium String Lock Insert Blocks. One place is from Floyd Rose, which maintains your warranty. Other places are not, which violates your warranty. That’s right. Read the Floyd Rose policies. Putting non-Floyd Rose parts on your Floyd Rose voids the warranty.

The Titanium String Lock Insert Blocks from Floyd are advertised to “resist any deforming or cracking”. That seems fair, in that it simply suggests it will “resist” those issues and is not promising the moon. Expectations are managed.

One of the other sources for Titanium String Lock Insert Blocks claims to be made of the highest grade available and suggest that other options are “very low grade”. Here’s what some people might consider a red flag. Advertising in absolutes and also disparaging the competition. And then the strength advertised would indicate Ti 6Al 4V, which is just an average strength in the realm of titanium alloys. Not the highest. Just “average”.

“Are there stronger grades out there for Floyds?” you ask. Sure. The titanium in the Floyd Rose Titanium Tremolo System is over 25% stronger than the “just average” mentioned above. Talk about taking it over the top. Just sayin’.

Now… that 25% stronger sounds awesome, doesn’t it?!? Except the 25% stronger is not what is used for these little square Titanium String Lock Insert Blocks for your day-to-day average Floyd.

Let me show you something. This following photo contains actual 2 sets Titanium String Lock Insert Blocks that I purchased. One set is the Floyd Rose offering, which is believed to be made by KTS. The other is not from Floyd or any company officially associated with Floyd. They are mixed in with each other. You can click on it for a larger version.

Before going any further, yes, those indentations are from the strings. Not unlike what you’d find on the stock String Lock Insert Blocks. There are a couple of things to unpack with that. The first is that this is a sign of the grade of titanium being used for this application. Yep, not all titanium is the same.

To get to the next point, do you see any machine marks on those Titanium String Lock Insert Blocks? Let me show an example of titanium that has been machined (also clickable).

You can see the indications of being machined on the bottom of the left block and the face of both.

Neither example of those Titanium String Lock Insert Blocks have those indications of being machined. In other words, both products appear to be “formed”. Floyd even advertises that. “Formed” suggests that it’s a more pliable grade of titanium that is pressed (or “formed”) in to that shape. That’s not uncommon with most of the commercial or pure grades of titanium. At least Floyd is honest about it.

Whoa there. Back up a second. You might be asking yourself how Brand X is making claims of being about 3-1/2 times stronger (based on published comments), but shows no signs of the machining needed to make those blocks from material that strong. Instead, it has all the indications of being “formed” in the manner of the “very low grade” the brand’s advertising derides. Even if Brand X’s material really is as strong as advertised, the only other option would be to “hot forge” those blocks. Except that getting that material hot enough for that process would also make the material softer and weaker.

We could dive even deeper, but I think the point is made by now. LOL!

Now, I get that some players are tied down to “identity purchasing” and they’d buy a steaming pile of poop as long as had a certain logo on it. However, guitarists can also be some of the biggest tightwads on the planet. Why pay almost 35% more (based on current pricing) for what all indications are for an identical product? … that will also void your warranty.

What do I use? I prefer the Titanium String Lock Insert Blocks over the standard ones. Yeah, back before Floyd offered these parts, I bought what was out there. Since then, it’s been the ones that Floyd sells. “But didn’t you just rip apart the Titanium String Lock Insert Blocks?” Nope, this is all about knowing what you are getting. I think getting the Titanium ones is a little better for my preference, I just like to not waste money on what appears to be a similar quality.

Spend your dough how you want. Most people want the best bang for the buck. Just because it cost more does not mean it’s always better. Keep yourself informed and put your hard-earned money to the best use for your needs. If there’s something you don’t know, call that company and ask or find a subject matter expert of your own. 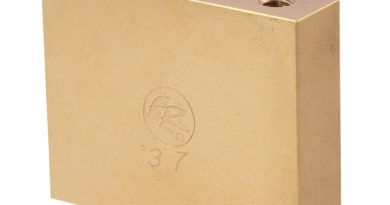 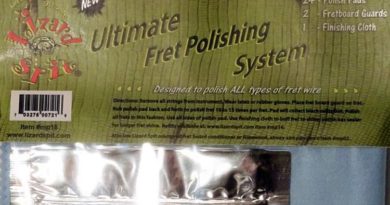 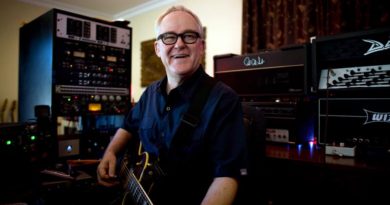