The Breed is another humbucker set for guitar virtuoso legend Steve Vai. DiMarzio indicates that The Breed was introduced in 1997, bit it’s not appearing in Ibanez catalogs until 1999. Which is to say that it is around and being put to work. It’s just a bit before it’s available on production models.

Generally speaking, the Ibanez models it’s seen on are basswood bodies. The most common model is the JEM7DBK. You might recall that one as having the sort of mottled black finish? Do the fret markers that resemble phillips head screw ring a bell? To be fair, this was a time when industrial and nu-metal is ruling. Players like Vai and Satriani are on page 16 of the Ibanez catalog, literally halfway back and ranked past the jazz players. Ouch!

Another guitar you see with The Breed pickups is the Bad Horsie JEM. The one with the mirror finish. Talk about a cool guitar for the stable! But since I’m already negligent in keeping the herd wiped down to spic and span, it’d be a lost cause! LOL!

For the sake of a reasonable comparison, The Breed set is going in the same test guitar as the Evolution set and the Evo 2 bridge.

The Breed humbuckers very much fit in to that archetypical range of a classic and versatile hot-rod character. Something that is going to be right at home in the glory of the spandex and mousse-abuse of the high-octane 80s riff-rock.

There are rumors that bridge is a hot version of other DiMarzio PAF-style models. But going by the ear, it sounds as if it’s cousins with the Tone Zone and the Music Man EVH. From the playability approach, there’s really nothing that I’m seeing the Breed bridge cannot do. As some suggest, there is a little beef to it. Not so much in a specific range, but just an over-reaching vibe. I sense a bit of a wide resonant peak going on. If so, that’d explain a lot. It’s a fun pickup and very much worth consideration.

The neck position is a character until itself. It’s more phat than fat. While the lows can be big, they are more about being bold and having depth. Go ahead and hit a few chrords down low and you’ll find that things do hold together well. Honestly, it was a little inconsistent for me across the neck. I’m wanting to like it, especially as it cleans up well. But if I want something in this ballpark for the neck, I’d be looking at the Gravity Storm neck. Could just be that it’s meant for a 24-fret Vai guitar, which puts the harmonics off when in a 22-fret axe. Even after adjustments to poles and over height. It’s serviceable, but just sort of lacking the appeal I’m getting from the bridge counterpart.

Yep, you are guessing right if you are thinking this is another one that DiMarzio has no official demo for. What a shame. You can look for some live performances online, if you are lucky. Vai has over a half-dozen of the mirror finish JEM77BRMR models and at least a pair of the black texture JEM7DBK.

One of the more famous JEM77BRMR models is “Bo”. The neck pickup was replaced with the sustainer transducer. But in the off chance that the stock bridge position Breed humbucker remains, here is a liver video:

Looking past the small quibbles with the neck position, this is a good set. Perhaps I need to find a better matching guitar for it. LOL! Looking at the history of the Vai models, this almost seems like a first attempt at something more organic. Maybe a step on the path to the aforementioned Gravity Storm set. The Breed is currently not an active production model. But you can buy them via a DiMarzio dealer or you can look online. 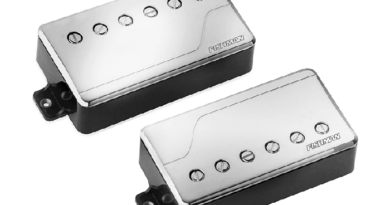