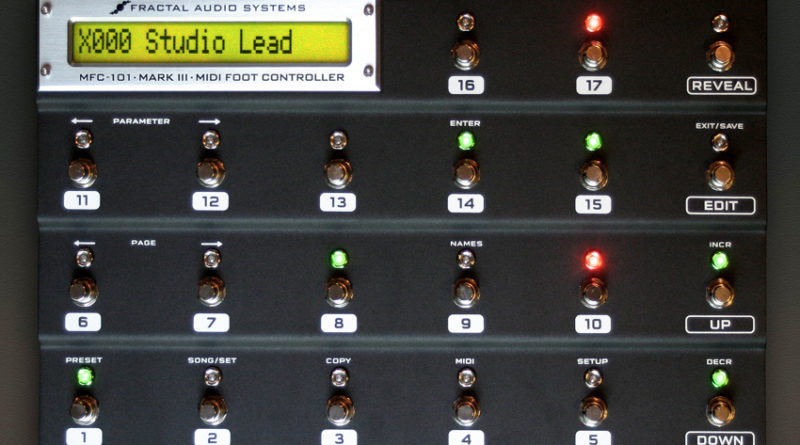 Fractal’s MFC-101 is a must for pretty much anyone with an Axe-Fx unit.  Why?  Because it takes 2 hands to play guitar!  And who wants to let the drummer think he’s the only one using all of his appendages?!  Ha!

But come on and face it, rock stars from the spare room to the world’s stages need to change a channel or a preset at some point during the gig.  And unless you’re at the level of Metallica or Def Leppard, the chances are doing your own switching.

As the MFC-101 is made with the Axe-Fx in mind, it’s pretty much a plug-and-play unit right out of the box.  You can connect it with your choice of MIDI, XLR for Fractal’s FASLINK connection, or a CAT5 cable.

The basic setup allows you to use the 1st row (buttons 1-5) for switching patches and the 2nd and 3rd rows (buttons 6-15) for turning effects on and off.  The Up and Down buttons lets you go… wait for it… up and down your list of presets.  Almost easy enough for a bassist to manage.  LOL!  Or tap the Reveal button and it puts your current preset into a Scene Mode to allow buttons 1-8 to pick from your pre-assigned scenes.  I like this option, as there is no latency between scene changes like there can be when changing presets.

You can also use the Edit button to make changes to the patch via the MFC-101 without going to the unit.  That can be groovy if you need to manage a quick change during the drum solo.  If you don’t have Axe-Edit up and running, this can be as effective and punching the buttons on the front of the Axe-Fx unit.  And it looks much cooler.  LOL!

One cool feature is the Looper Control Mode.  Set up a patch with a Looper block and you can run the feature from the MFC-101.  You can control the recording of a loop and then play over it or keep adding to it.  Think of it, you can be the next Ed Sheeran… but with a much cooler Foot Controller!

Another option that is informally referred to as Song Mode, or Set Mode, allows you to program the MFC-101 to run through your assigned presets to compliment the order of the songs you are playing.  That can be handy for a number of applications.  I’m thinking it’d be groovy if you’re in a cover/tribute band that has very specific tones dialed up for each song.  Not everyone uses the same preset for the Sex Pistols as they do for Journey, I suppose.  HaHa!

The MFC-101 also allows from some hardcore deep diving into whatever level of tweaking suits your level of obsession.  Not content to use a button to switch a preset or to turn an effect on or off?  How about tweaks within an effect?  You want a button to take the level of your Phaser effect from 40% to 75%?  Or a button to change the rate of your Chorus?  Many of the modifications that can be made can generally be assigned to one of the buttons.  Or maybe you just don’t like the order that the defaults are laid out for the effects.  You can tweak that as well.

Room for expansion is covered with connections for Expression Pedals and additional switches.  Most commonly, you’ll see people add a few pedals to assign for volume and/or wah.  Not to miss out on any tweaks, you can assign an external pedal to control an assigned value of an effect.

For all the power available from the MFC-101, lemme tell you what I like.  The tuner!  Ah, the simple things!  LOL!  That’s right, you can tune up right there at the pedal board.  And why not?  You’ve eliminated all the capacitance from all the patch cables associated with a conventional pedal board.  Go all the way and remove the need for an external tuner while you’re in there.

In all fairness, I do think it’s necessary to refer to the MFC-Edit software.  With my own experience and after discussing it with others that have used it, it’s a mixed bag.  While it does allow for editing the MFC-101 via a GUI, the common complaint is that it does not do so in real time.  It has to upload your configuration, you make changes, then you download the new configuration back to the MFC-101.  It can be a slow process.  In Fractal’s defense, MFC-Edit is a third-party application.

You know as well as I do that this only scratches the surface of what you can do with the MFC-101.  The timely question is if the MFC-101 is still relevant with consideration to the new Axe-Fx III controllers.  The MFC-101 is still a MIDI controller and can be programmed to work with the Axe-Fx III, although not the same plug-and-play that it is with previous Axe-Fx units.  The good news is that you should expect a lot of the MFC-101 units to be flooding the marketing as soon as the new foot controllers hit the street.

Just as elemental as the Axe-Edit software, I cannot imagine using the Axe-Fx II XL+ without the MFC-101.

There are really no official videos on Fractal’s YouTube on the MFC-101.  However, there’s no shortage of End User tutorials out there.  Be patient as you dig through them to find the ones that are best for your needs. 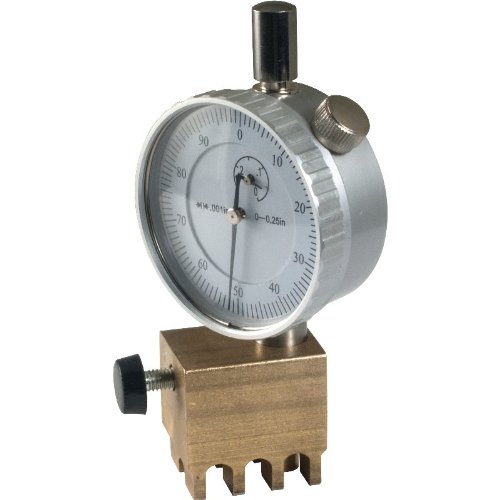 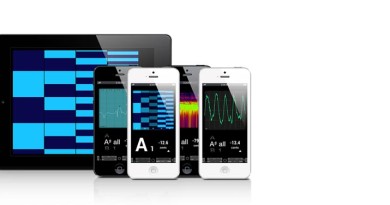 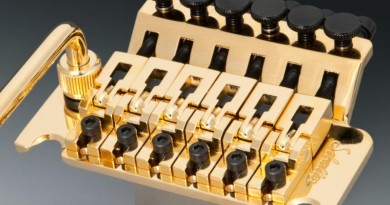