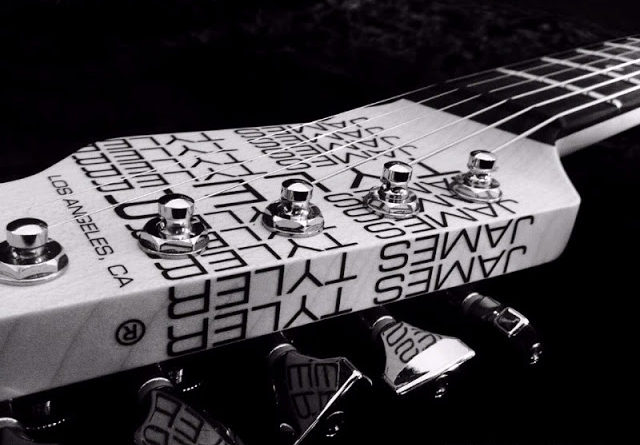 How would you sort or classify electric guitars in two, if you try? Good and bad, Strat or Les Paul relevant? Beautiful and ugly? Guitars with good tone or ones lack of tone? How about a new alternative: James Tyler and the rest? Too exaggerated? Then, you are now where i was before trying out a Tyler. For years, that was what i had in mind: “How great could it be?”. Those weird guitars with the ugliest of the ugliness headstocks, i thought, couldn’t be more and more amazing while there were prettier modern models from other brands like Suhr… But i know something now!

First of all, as always, catalog information:

The first thing you will notice and adore is the distinctive finish of the guitar, once you open the case. The relation of James Tyler and Mike Landau lies deep in the roots of this weird finish type. James says on the  “Guitar Buyer” Magazines January 2006 issue “They have grown out of the original Psychedelic Vomit, which started as a joke that guitar player Mike Landau and i were having on the world. Unfortunately, the world took it seriously…” As a note here, i must admit, i love the sense of humor of that guy! Anyway, in the year 2000, as a newcomer model,  “Burning Water” series with out finish on the arm contour got their places on the market. And after a few years later the one i am reviewing James Tyler Studio Elite Burning Water 2K has come out as upgraded model of Studio Elite Burning Water.

This finish reminds me “swirl method” that i’d once written an article about. Every finish on Studio Elite Burning Water 2K is unique and unrepeatable fully. This really is an advantage for that guitar. It looks very satiny; soft but outstandingly gorgeous. Metallic but not harsh. Furthermore, very sexy. The finish on the neck is so soft and  smooth but not metallic.

Once you hold the guitar, its light-weighted structure makes you impressed. Yes, this is very light and resonant body. Anyone can feel vibrations with every possible muscle/nerve. That’s another +1 point to the Tyler. As far as i can follow our guy, Jim Tyler, is way too concerned to resonance and weight phenomena. Up till now, I’ve read many of his interviews, his blog articles etc. and i am exactly where he tells. Now, i know his theories and assertions about tone, sustain, resonance etc. are for real. If you are aware of his approach on tone, this guitar is what you will find.

There two options for body wood: good ole “Alder” and “Mamywo”. The one I’ve played was made out of alder. And i can barely hear you say “What the heck is mamywo?” It is the phrase come from “MA-laysian MY-stery WO-od”. There is no official explanation yet, even if there are rumors. But i think this is the smartest move I’ve ever seen on guitar scene. I truly believe that nobody can sell an electric guitar  made out of Far Eastern wood with over $4000 price tag on.

The problem is not the wood may not be worth of using or not. The problem is about the stationary thoughts and conservative beliefs about electric guitars. In that exact point, Jim Tyler appears and shows his commercial mastery. He found a Malaysian wood that would be a great material choice but he was aware of possible marketing issues. What he did was to give a “nickname” to that wood and shroud it into a mystery so that people can try it without any prejudice. Perfectly clever move Mr.Tyler. Anyway, I’ve never tried a Tyler with MaMyWo body, so i don’t have any word for you to describe.

The design of the body is almost a Stratocaster as you can see. There only a few alterations Mr.Tyler has handled to make that body more comfortable. The comfort in the upper register and neck heel is almost perfect and very handy.

Let’s come to the neck. First of all its chunky. Not TOO much but clearly thick. Way close to the  Fenders famous 59 neck profile. I had not got a caliper with me so i couldn’t measure it but i believe it was pretty close to almost an inch. Due to my sympathy to chunky necks, i adore it and found very comfortable. If you don’t like skinny necks of Ibanez or Jackson, just simply skip that but be aware that you will regret sooner or later.

One of the most striking aspects of the neck is the some kind of scalloped areas between the top of the frets. No, i am not telling you about the scalloped fingerboards, this is different. Only the edges of the outer fret board. There is not huge gap between the frets, only a slight broken in feeling. Look for the photos below, you will understand what i mean. Tiny aspect but useful. How should i describe you about the fret job? Just saying “Perfect” is enough for you?

And headstocks… The biggest controversy about Tyler Guitars… Well, i will confess. They made me sick for a while, either. BUT those freaking headstock form serves two main goals: First one is having a unique “image”. If you have a Tyler, anyone can notice you have a Tyler. The design of the headstock forms of many companies are fairly similar with old Fender headstocks, while James Tyler has its “brave-to-be-different” headstocks radically. Okay, risky but it works so that the “man” himself expands his business day by day even if many people have certain repulsive feeling with the headstock design. Consequently, i believe that James Tyler grows and pervades his own brand awareness. Have i told how smart this guy is? He really is!

The next aspect about weirdo headstock is functionality. It is widely believed that bigger headstocks get longer sustain. Moreover, bigger headstocks are also good for possible dead spots on the neck. And, i have not seen any evident of those dammin’ dead spots on the Tyler i played. Actually, every position played like bell! But if you are way too conservative about those headstocks, well, it’s your loss, then. The guitar itself plays so impressive that no headstock can hurt your eye. Moreover, at the end of your playing you find yourself in love with its headstock, too 🙂

PARTS OF A WHOLE

Well, parts of the guitar are all hi-end hardware. Tremolo is called G6RV. It reminiscent of GOTOHs 510T FST. I don’t know certainly but they are very similar from the trem block design to the place where trem arm pops in. You can look for GOTOH 510T FST and compare yourselves. Anyway, saddles are made by Raw Vintage. Old style bent steel saddles.

The tuners are staggered Hipshots Grip-Lock model with its open gear mechanism and string lock unit. I didn’t use the tremolo agressively but i love it how lock the strings. But i particularly loved their 18:1 sensitivity. Pretty accurate and precise.

And the nut… Nut is the first strategic spot i always check. They are way TOO important for intonation (especially for first couple of frets), playing ease, string action, open string tonality and sustain. The material used on Tyler Studio Elite Burning Water 2K reminded strongly Black TusQ. I’m not sure if it is TusQ or not but its clear that it really made really well and accurate. All string slots, every edge of the nut and the perfectly positioning of the nut were a slap in your face. The guitar gets its price, my friends…

Let’s talk about the tones of the guitar. The essence tone (unelectrified/unplugged tone) of it was pretty clear, brilliant, loud and it has volume. It has some exceptions sometimes but i have a modest rule: the louder and more vibrant the guitar unplugged, the greater when plugged (if the pickups are  equally good, too). That rule works pretty well with Tyler SEBW 2K. That particular Tyler is so vibrant and resonant that describing how it was gets difficult. I’m not exaggerating, just play it if you have a chance to play and face it. Yes, slap in the face!

It sounds pretty wonderful when plugged, too. Jim Tyler used to use products of familiar hi-end brands like Seymour Duncan, Lindy Fralin. But for a while, uses his own winding pickups as on that Studio Elite Burning Water 2K. At that point, i’ll also note the other gear i plugged guitar directly: Orange TH-30 Combo amp, Phantom Overdrive and Electro Harmonix Holy Grail pedals. Well, Tyler SEBW has JTS5500 on neck and middle position, SECRET humbucker on the bridge. JTS singles are bright sounding, Standard wound with its alnico V pole pieces. Neck and neck+middle pickup positions are so delightful. You can lose control and play hours and hours with that two positions.

Really, really impressive tones you will hear. Very clear, very tight but not harsh, so well balanced tones. Add little bit dirt and you still have clear sound. The pots are handy, on the other hand. The “SECRET” humbucker has an alnico V magnet and wound around 14K. It is not an ultra hi-gain pickup but it can cut through the densest mix. Actually, i was pretty blown away with neck pickup so that i didn’t play with that position, so that i can’t tell you more 🙂

The biggest versatility improver of the guitar is its on-board booster unit. Well, roughly, it can be considered as some kind of built-in tube screamer near down your fingers. You can adjust its boosting level with a knob between the volume and tone knobs. When it is on its minimum, it works more like a clean booster pedal. But turn it to eleven and see how it can set your tone on fire. Ahoy you pirates, ye are warned!

To whom the guitar is for? Okay, first of all, the ones have large credit card limit or thicker wallets, of course, because that son-of-a-bitch has an enormous price tag. But, can that thick price tag make Tyler Studio Elite Burning Water 2K really expensive? Look, i know many guys who have several Fender Standard or deluxe Stratocasters which are now sold in ~$900-1000 on Music123. I know some studio musicians have several strats to play live and/or recording sessions, for different kind of genres in Studios etc.

One Tyler SEBW costs 3 or 4 Fender Stats made in US, right? So to me, a Tyler SEBW sounds, plays, tones better than 3 or 4 strats, and it seriously worth it. Why collecting several equivalent strats in the house? Buy just one of them and bring it with you to studio for virtually every kind of music recordings or go to the stage to play live, no matter where you play. Great strat tones are under your hands.

So, in my opinion, professionally recording and gigging/touring musicians will find Tyler SEBW so useful. But not just for them only. If you have enough budget to have a strictly great playing, effective sounding, comfortable, awesome appearing, lightweighted, well balanced, intense guitar with neat hardware, efficient onboard booster unit, precise tuners, perfect fret job, there you go! Buy a James Tyler SEBW. Forget about the headstock, it only sustains fifteen seconds after start playing for a Standard healthy mojo addict. In those fifteen seconds some kind of bonds get formed and after those seconds you find yourself in love with the guitar and the headstock also. Don’t miss it 😉 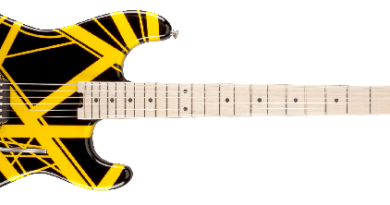 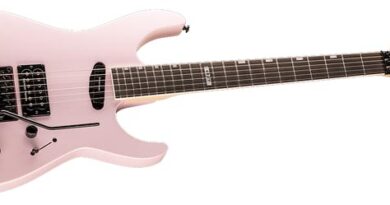 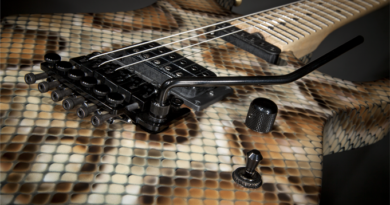