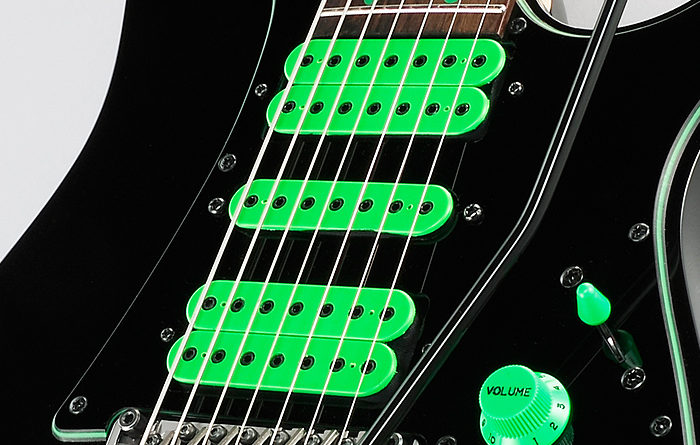 When Steve Vai worked with Ibanez Guitars to develop the 7-string Universe model, I was deep into the Vai Kool-Aid. He had played on Whitesnake’s “Slip Of The Tongue”, the follow up to the seminal self-titled album, and he had just released his own new album, “Passion And Warfare”. He was THE poster boy for the guitar virtuoso movement of the late 80s.

There was just one problem. I couldn’t play like Vai. lol! Never came close. haha! Yep, I’m clearly in that majority of players that definitely appreciate what Vai brings to the art, but I might as well twist my fingers into pretzels rather than besmirch any attempt at his level of playing.

But the Ibanez Universe was a production model… putting it within the reach of common folk.  I would pick up an Ibanez JEM model from time to time in the music store and it was great. The JEM of the 80s is a guitar that I consider to be on my list of guitars I should have gotten. lol! Yet the 7-string Universe was sort of the same, yet sort of different. Still, I had to have one. A local shop got one in, a black one with green pickups…. serial # 38. It was a done deal.

A 7-string guitar is fairly common these days. Even more common is seeing them tuned down and used for nu metal or metal core or djent or whatever the whipper snappers are calling it these days! haha! Back then, other player’s players like Reb Beach were also dabbling in the extended tapestry of the lower registers.

However, there was pretty much only one set of pickups to choose from at that time. The DiMarzio Blaze models. Now, it does take all kinds and that is why there is so much variety in the realm of pickups. So I can dig it if there are fans of the original Blaze 7-string bridge model. The tone just didn’t seem to work as well for me as the tones I was finding in 6-string pickups. I even remember visiting with a rather well-known bearded pickup maker based in Santa Barbara about 7-string models in the early 90s.

I decided to go back to that guitar here lately. 7-string pickups are more prevalent these days and there are many options to go with that are very tempting. Admittedly, I did play it a little safe with the DiMarzio Blaze Custom bridge model. It was one of the earliest options to the original Blaze bridge model, addressing the most obvious concern of the scooped mids.

The DP703 Blaze Custom is another example of a lower DC resistance that delivers a higher output (when compared to the original Blaze model) – I’ll throw in some specs in a second. But it doesn’t really feel that much hotter. One of the things with the original Blaze is that it has a bit of a metallic dry crispy crunchy feel, giving it the vibe of a sterile scratchy tone. The Blaze Custom clearly comes across as an effort to respond to players with that feedback.

It has a big sound, with plenty of presence. The lows are powerful, yet controlled and not at all out of bounds with that low B string. The extended low register has punch, but is articulate without being crisp. While there are more mids than the original Blaze model, there is no mid “hump”. It does seem the mids are a little slanted toward the upper mids, so you get a bit more roar than a growl. The high end is pretty similar to the original Blaze, with plenty of cut and a little more character.

The real defining moments of giving this one a test drive revolved around that harmonics and the sustain. Wow! Wowie wow wow! Tapped harmonics ring out and pinched harmonics squeal. And they do so with the type of sustain that makes you want to get new batteries for the stopwatch. DiMarzio credits this to their dual-resonance design, which is actually applied to the original Blaze and the Blaze Custom. This gives the Blaze Custom more natural harmonics, musical overtones and a more open quality.

Just for giggles, here are posted specs on both pickups

Here are some actual DCR specs that I took: 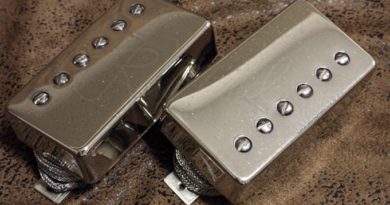 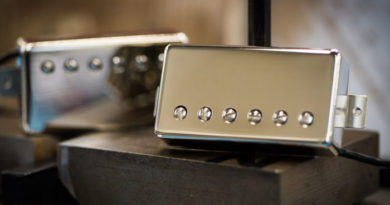