ESP’s LTD Mirage Deluxe ’87 is a throwback to the pinnacle of guitar shred. A time when jam room (or bedroom) walls are awash with the imagery of guitarists and guitars that will define decades of tone quests.

This is my 5th ESP brand product. Predecessors include an early 90s Kamikaze. A mid 90s ESP M-II Deluxe. A mid 90s Sunburst Tiger. And a late 90s Serpent. Guitars predating these are mostly Kramer. And since ESP was a primary supplier of Kramer neck, bodies, and complete guitars (Stagemaster anyone?), it’s making sense to stick with the source.

The ’87 Series is something that was new for 2020. The M-1 Custom ’87 is looking really sweet! But I’m liking the bolt-on Super Strat approach and that means it’s the Mirage Deluxe ’87. The Snow White finish with the gold hardware is a sweet ride, but if I’m going retro it’s got to be the Pearl Pink for me!

When it gets here, you know I’m giving it a solid inspection to leave no stone unturned.

Hands-down, I have to admit that the neck relief is solid and the intonation is spot on. Let’s unpack that part. This is coming from a retailer that does nothing to guitars. No set up. No bazillion point inspection. It arrives and goes on the warehouse shelf in the shipping box it comes in until it ships to the customer, without being opened. That means that how I am seeing this guitar is how it goes out from the factory. So it’s all on the shop, one way or the other.

The action is a little high for my tastes, but that’s a personal preference. As always, when adjusting action with a Floyd Rose be sure to loosen the string and turn the posts with no contact or friction with the baseplate. Yes, it takes a few extra minutes. But worth it to avoid improper wear and tear.

The alder body is in your standard shred-stick Super Strat shape. A sharper round over along the edges with slightly longer horns. Generally known as a “soloist” vibe. The neck pocket is snug without being overly tight.

Topside routing is for a hum in the bridge, a slant single in the neck, and a recess route for the Floyd Rose. That neck slant takes on the traditional bass side toward the neck and treble side toward the bridge.

The routes in the back are for the trem and the electronics cavities. Both are just roomy enough to allow ample access for operation and maintenance.

On the sonic side, the Mirage Deluxe ’87 is meant for full-tilt damage. It has a Seymour Duncan Distortion model in the bridge and a Hot Rail in the neck. The tone control is a push/pull pot that splits them both. That is to say that they are both split at the same time. Switching is a 3-way slider.

The control harness is in a neat package with a zip tie around it. No spaghetti here! For full disclosure, you may or may not want to swap out the pots and other harness elements.

Let’s face it. This is a mid-level instrument and comparable specs with the ESP logo is easily going to cost at least twice as much. Then again, it’s got a Distortion and a Hot Rail, so it’s not going for subtlety. HaHa!

Tuners are LTD-branded Schaller-style and it comes with standard strap buttons.

You’re here for the Floyd Rose. Yes, it has the 1000 series tremolo system with a 37mm block and a R3 locking nut. After weeks of use and abuse, I can say it’s holding up well. I suspect coming from the factory with some quality D’Addario XL120 string helps, as well. As you would expect, the trem recess allows for a wide range of up and down motion.

The string tree behind the nut is a bit high out of the box. That’s not terribly uncommon. Lowering it down a little quickly gets the break angle where it need to be for optimum results.

Where the rubber meets the road! LOL! The neck can make or break the rest of the instrument.

The thin U profile is 20mm (0.787″) at the 1st fret and 22mm (0.866″) at the 12th. That’s a little thicker than an Ibanez, for example. In more Strat-like terms, that’s similar to a Thin C. This is a 3-pc laminate neck that you know if you’re familiar with the old “Kramer American” series necks. A volute offers a little extra stability behind the nut, although it’s not a neck-thru nut install.

For the fingerboard, the selection is macassar ebony. It’s a little more chocolaty than pure black. But it is very smooth and delivers attack and sustain. The inlays are the asymmetrical blocks ESP is known for from that era, making it a cool nostalgic touch. A curious addition is binding around the board and headstock.

The 22 frets are definitely extra jumbo. This is fairly common on a lot of guitars these days. From guitars I have from that same era, this size is about a notch taller than what was common at the time on most brands. From a matter of personal taste, I have to say I’m not a fan. However, everything intonates properly on this guitar and I am not having any tuning issues during performance. So I’ll call it even. LOL!

It has an interesting fretboard radius of 350mm (approx 14″). So it sort of splits the difference between a 12-16 compound radius.

OK, fine. I can be a little hard-nosed with some observations. I admit it. HaHa! But what good would I be if I were not?

On this Mirage Deluxe ’87, it’s about the fret ends. Also called fret sprout. The ends are simply extending out too far past the edge of the board.

One the one hand, this can be from how the dressing is done at the factory. On the other hand, it can be from wood shrinkage. Without being there to see the frets being worked or without knowing the moisture level of the wood in use, I cannot comment on the cause. In this instance, it’s a simple fix with a 3-way nail buffer and a little elbow grease. Then a little onceover with some micromesh. A heavy duty fret leveling file might have been quicker, but the binding is a concern for me with that approach.

This is a fun guitar! Built for speed and designed to shred. Just add spandex and AquaNet! HaHa! Yes, this is a mid-level guitar and should not be expected to possess the same refinements as a $3000+ options.

Still, trying to capture the 1980s apex of guitar shred is a big trend with some guitar gear companies. Some of the competition can take some lessons from ESP with what they are doing with the ’87 Series. These LTD models replicate the models that guitarists want and do it in the colors that drive the players wild. 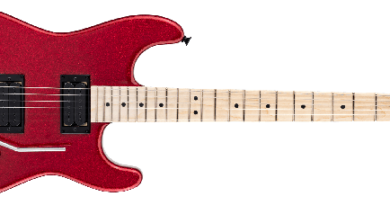 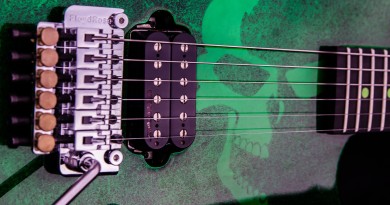 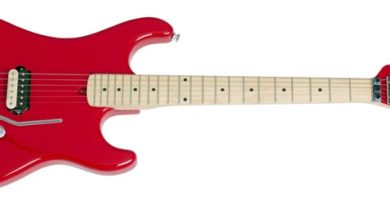